With covid shots in arms, Chari and I packed up and headed to Kearney, NE to watch and photograph the annual sand crane migration. Hundreds of thousands of cranes stop near Kearney, NE before heading to their northern home.

First night, we watched the cranes coming in to roost at the Central Platte NRD Plautz Viewing Site north of I80 on Lowell Rd. The site was crowded but not bad. The sun was down when the cranes started landing in the Platte River. The sunset was stunning. 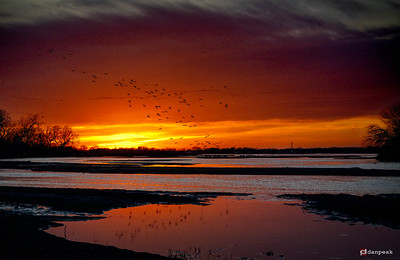 Sand cranes land on the Platte River near Kearney, Nebr. Hundreds of thousand sand cranes migrate to the Platte River valley to fuel up before resuming their northward migration. (photo by DAN PEAK)We stayed until it was nearly dark then headed back to Kearney for the night.

The next morning I ended up at the Plautz viewing site just after sunrise. The crane take off was over so I headed out to find the cranes dancing in the fields. It is not hard to find crane. The birds are everywhere. The hard part is finding cranes "dancing" instead of eating. I wonder around south of the river on country roads before spotting an active group of cranes. I spent the next hour or so watching and photographing the dance of the cranes.

And the best was yet to come.

The next day, I spent the morning preparing to spend the night in a blind in the middle of the Platte River. The blind is part of Chad Gideon's Crane Cabin Retreat experience near Grand Island, NE. Chari and I arrived around 5 pm. at the end of Chad's driveway, a stone's throw from the Platte River. Chad and son J??? greeted us with a warm welcome and big smiles. Chad loaded us up in his pickup and we headed to the river. The blind is about 25-30 yards on the diagonal from the shore. To get there you wad the river pulling your gear in a small boat. 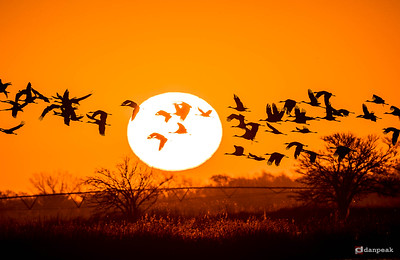 Sand cranes head for the fields after a night on the Platte River near Kearney, Nebr. Hundreds of thousand sand cranes migrate to the Platte River valley to fuel up before resuming their northward migration. (photo by DAN PEAK) After loading the boat with my gear and a few photos from Chad and Chari, I headed for the blind. Pretty easy trek though the river bottom mud was challenging in spots. Once at the blind, I unpacked the boat, setup in the blind, ate my sandwich and set back waiting for the cranes to arrive.

The first group of cranes landed about 6:30 pm some 200 yards away and unfortunate all others followed suit. I heard the cranes landing well after dark. The temperature fell to 18 degrees though I was comfortable with the aid of a butane heater. The cranes got no closer during the night. I woke before sunrise and photographed the cranes take off as the sun rose.

After most of the cranes had left the river, I packed and headed to shore where Chad waited to pick me up. Going against the current was much harder.

My overnighter with the cranes was quite the experience and plans for next year's migration are in the works. A big thanks to Chad and rave reviews for the Crane Cabin Retreat experience.